skip to main | skip to sidebar

She's been gone a year today.

I've known Juanita (one of my sister-in-laws) since I was about 10 or 11; she became a big sister to me. During the couple of years I lived with them in my teens, we had a standing joke when we played card games; she'd get the giggles & we'd look at the clock, and the magic hour for the giggles to start, was after 11:00pm - we could set our clocks by it. She could be great fun to be with.

DH & I moved across to the other side of the country a few years ago, and 3 years ago Jake & Juanita came for a visit, with their 5th wheel in tow.

They visited with us over the course of a few weeks in our area, so it seemed like a good idea to introduce Juanita to my quilting room, and to tutor her with making a small quilting project. She'd never done anything like it, "sew" was a bit reluctant, but with a bit of coaxing & coaching, she agreed to make a couple of placemats. We went "shopping" in my stash; she used the design wall to decide on a pleasing-to-her placement of the blocks. She learned about & mastered that almighty ¼" seam allowance. She quilted them with an organic straight line stitching, squared up, trimmed, and cut & created the binding, which she completely sewed on by machine.

As per usual, I took pictures, and I am SO glad I did. Two years & three days later, she was unexpectedly gone. I managed to capture a couple of perfect pictures of her proudly looking at her creation. 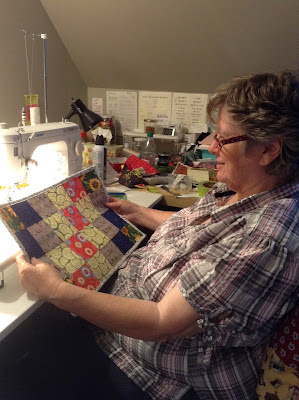 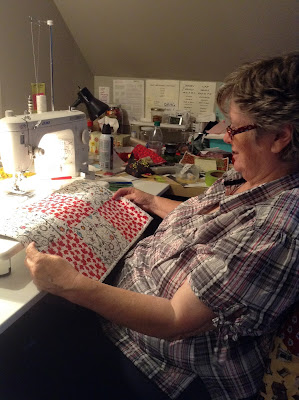 eva
PATCHWORKING is a passion of mine; my favourite kind is scrappy patchworking and making useable quilts. Spending time in my sewing room is what I hope to do more of. There's always new things to learn....